Cannabis and psychosis symptoms: The role of the endocannabinoid system in the human brain 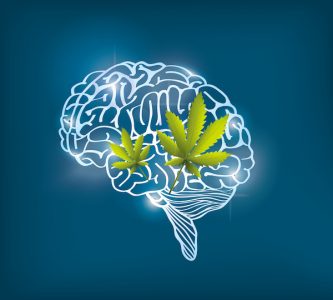 You may have heard that smoking marijuana causes schizophrenia. While this is not entirely accurate, there are some examples of otherwise healthy people experiencing psychotic symptoms after consuming marijuana [1].

When this happens, it’s never solely due to consuming cannabis. It’s actually  a result of complicated factors interacting with one another, such as a person’s biology, genetics, and the environment in which they live [2, 3].

Cannabis is not an entirely alien substance to our brains. We have what is known as the endocannabinoid system, and it is widespread throughout almost every system in our bodies. It is comprised of two major receptors–CB1 and CB2–where THC and CBD act. Molecules that are already in our bodies, such as anandamide (commonly referred to as AEA) also act at these receptor sites in order to control a wide variety of bodily functions such as mood, sleep and energy [4].

If AEA becomes imbalanced, our bodies can start to behave in ways that are out of the ordinary. For example, higher than normal levels of brain AEA have been observed in patients with psychosis disorders such as schizophrenia [5], and in otherwise healthy marijuana users experiencing psychotic symptoms [6].

What are psychosis symptoms?

The relationship between AEA and psychosis:

To better understand the role that the human endocannabinoid system plays in psychosis, Dr. Jeremey Watts and his colleagues recently conducted an imaging study [7]. Using an imaging technique known as positron emission tomography (PET), researchers were able to “look” into the brains of their subjects and measure targeted molecule levels.

Dr. Watts’ study was specifically looking at levels of a FAAH, a molecule that is responsible for breaking down AEA and thus controls AEA levels in the brain. In other words, when FAAH is low, AEA is high, and vice versa. Since previous studies found high AEA levels in the brains of people with psychosis, Dr. Watts and his colleagues predicted that low FAAH levels would also be present in similar brains.

After recruiting a group of patients with psychosis and a group of healthy individuals to compare their findings with, they noted that FAAH levels did not in fact differ between the two groups. However, within the psychosis group, they did see that patients who had lower FAAH levels had more severe positive psychosis symptoms. In other words, when FAAH was low and AEA was high, the hallucinations and delusions experienced by the psychosis patients were worse.

FAAH as an indicator of disease severity:

Dr. Watts’ study highlights part of the role of the endocannabinoid system in human psychosis. Showing that there are no differences in FAAH levels between psychosis patients and healthy people suggests that FAAH levels are not necessarily an indicator of disease. Rather, the range of FAAH levels in the brains of psychosis patients could suggest that the decrease in FAAH levels is related to disease severity or progression instead. This is important because it provides base knowledge for further understanding cannabis-induced psychosis as well as suggesting a new target for psychosis treatment.

4.        S. Zou and U. Kumar, Cannabinoid receptors and the endocannabinoid system: Signaling and function in the central nervous system, (2018).