Our second brain: More than a gut feeling 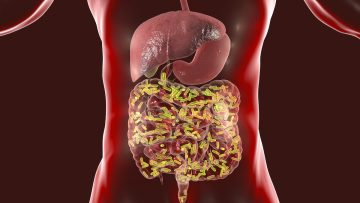 But what may not be obvious is just how connected the brain and gut are. Emerging evidence is showing that the gut–brain axis is one of the most powerful relationships in our body.

Comprised of 100 million neurons, the network of nerve cells lining the digestive tract is so extensive that it has earned the nickname “second brain.” Technically known as the enteric nervous system, this network of neurons is often overlooked and contains more nerve cells than the spinal cord or peripheral nervous system.

Beyond the sheer volume of neurons, our second brain bears even more resemblance to the brain in our heads. The mass of neural tissue in our gut produces over 30 different neurotransmitters, which are signalling molecules typically associated with the brain. This includes a staggering 95% of the production and storage of serotonin, the neurotransmitter famously known as the “happy chemical” due to its role in regulating mood and wellbeing.

So how do the brain and gut actually talk to each other?

A thick cable of neurons runs between the base of the brain and our gut forming the vagus nerve, the longest cranial nerve in our body. The vagus nerve serves as a bidirectional information highway, with the brain and gut sending messages to each other within the order of milliseconds.

The vagus nerve isn’t the only way the brain and gut communicate. Our guts are home to trillions of bacteria and microbes that inhabit the intestines and form the gut microbiota. The gut microbiome is so enormous that there are 100,000 times more microbes in your gut than there are people on earth.

Many of these microbes live in the mucus layer that lines the intestines, placing them in direct contact with nerve and immune cells, which are the major information gathering systems of our bodies. This location also primes microbes to listen in as the brain signals stress, anxiety or even happiness along the vagus nerve.

But the microbes in our gut microbiome don’t just listen. These cells produce modulating signals that send information back up to the brain. In fact, 90% of the neurons in the vagus nerve are actually carrying information from the gut to the brain, not the other way around. This means the signals generated in the gut can massively influence the brain.

Brain Disease: The Influence of Gut Health on Brain Health

The crosstalk along the gut–brain axis helps make sense of the accumulating evidence that the gut is involved in brain health and disease. Many neurological conditions, such as Parkinson’s disease, Alzheimer’s disease, schizophrenia, and autism spectrum disorder are correlated with gastrointestinal issues or altered gut microbiomes.

Recent research on Parkinson’s disease found that the enteric nervous system begins to degenerate before the classical symptoms of Parkinson’s appear, and a dysfunctional gut microbiome is typical of this disease. Further, there is a significant decrease in the quantity of microbes in the gut microbiome of individuals with Alzheimer’s disease, and an unhealthy diet is a commonly cited risk factor for Alzheimer’s.

One explanation for this is the role of inflammation, which is a chronic symptom in many neurological conditions. Disruption in the health of the gut microbiome can trigger an immune response and lead to inflammation. Over 70% of the body’s immune cells are targeted to the digestive tract—which is helpful in the case of ingesting toxic bacteria—but also means a gut-immune response can launch a powerful inflammatory response in the body.

Gut Feelings: The Role of the Second Brain in Mood Disorders

Inflammation is also a hallmark of mental illness and may explain the link between gut and mental health. For example, a recent study reported that a significant number of patients with inflammatory bowel disease also suffered from depression and anxiety.

Both the vagus nerve and gut microbiota are likely involved in this. Stimulation of the vagus nerve has been shown to reduce inflammation and stress, and some researchers are even suggesting that vagus stimulation could be a new drug-free antidepressant. Certain healthy gut bugs like the probiotic Lactobaccilus rhamnosus, can even send signals to neurons to release GABA, a neurotransmitter that promotes calmness. Gut microbes also promote neuroplasticity, a process implicated in mood.

While it is now apparent that the gut is more than just a machine for digesting food, there is still much to be discovered in terms of how the gut can influence overall health. As our understanding of the gut–brain axis increases, there is the exciting possibility that improving gut health may lead to breakthroughs for treating brain disorders.

3 responses to “Our second brain: More than a gut feeling”